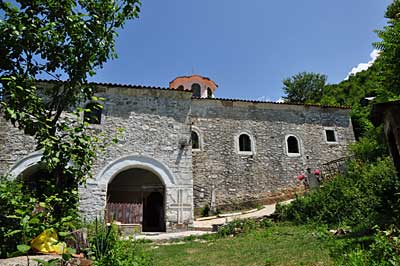 The church was built in 1885 and has some exceptionally well preserved icons painted directly on the iconostasis. It was built during the period of Turkish occupation without their permission. When they understood the church had been built, they came to the village to destroy it. However, when they saw the church, they were astonished by its beauty and how a Turkish style had been incorporated into the overall design. This saved the church from demolition and preserved it for future generations. During the uprising against the Turkish domination of Macedonia on St Elija’s Day, 1903, the villagers took refuge in the church while the village was ransacked and virtually destroyed by fire. Our great-grandfather, Father Stomat, the priest of the village, was taken out of the village by the Turks and brutally stoned to death, as an example to other villages thinking of revolution. Village Pirin suffered the greatest casualties during the 1903 uprising. The church is kept as a treasure for the village and every 2nd November, a cow is sacrificed in a thanksgiving ritual or ‘Kyrban’.