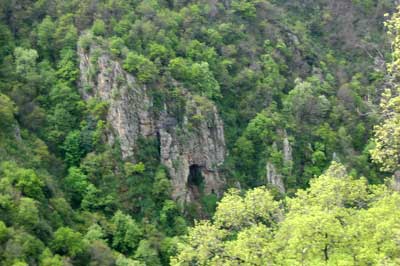 Day trip to the 'Dragon's Cave'

The Cave is 4.5km south of village Pirin via Santa Troitsa. From this place you can appreciate the real beauty of the valley, though the Cave itself is only accessible by fit hikers.
There is a legend that a Dragon came to village Pirin every night, to see the beautiful girl Kalina. The villagers and her mother were very angry that Kalina had attracted the Dragon. Her mother decided to poison Kalina with ‘Stovras’ herbs. She boiled them and threw the boiling water at her, but instead of Kalina, it hit her girlfriend and killed her! The Dragon became very angry and made a thunder storm with heavy rain. The villagers and Kalina went to the river to collect the fresh water before it became muddy with the flood. As Kalina arrived, a torrent swept her away but she was saved by the Dragon changing himself into a big pine tree in the middle of the river; she held on to it and was carried through the village and disappeared with him for ever!
People believe this legend and pass on the story to their children and grandchildren.
The excursion to the Dragon’s Cave is a real pleasure with unforgettable views and the glory of lilac in flower during the Spring.