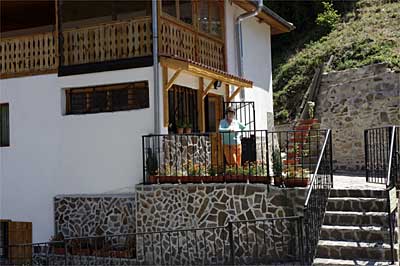 Story for our start of restoration in village Pirin

The Bisserov Sisters and family were born in Pirin village. In 1968, my father received a letter saying that our family’s two houses would be demolished to provide land for the building of a cultural palace. .As a result of this, our father and his brother bought land in village Levunovo and, in 1969, built a new family house. We left the village and now have just a few relatives living there. From 1978 the Bisserov Sisters started to perform around the world, returning to village Pirin from time to time, to film our native place.

Soon after, our grand parents died and their house in Pirin became empty. It was very sad to see it abandoned. It was originally our great grand father’s house, from my mother’s side. My great grandfather was a priest in village Pirin and was killed as a hero, during the Turkish occupation, fighting for Bulgarian freedom in Pirin village (part of Macedonia at the time). When he was killed, he left four sons, one of which is our grand father.

At first, my husband, Bob, and I think to restore his small house as a guesthouse, but soon realize it would be better as a historical and ethnographic museum to preserve the history of the village.

In 2006, the Sisters and I start to organize an International Folk Festival in cooperation with Sandanski Municipality. We started with performances at Sandanski, Rojen Monastery and village Pirin and have completed a Fourth Festival in 2009.

The old Bakery in Pirin village was in very bad condition and I was excited at the possibility of buying and restoring the building. I was delighted when the Cooperative Organization let us buy the property and work on its restoration. All our family are very close to the Bakery house because our father was the main builder during the 1960s. When I started to prepare the sale documents, many people from the village told me my father and all the Bisserov family were famous as dry stone wall builders in early 19th Century.

I remember my father working in the Bakery house as a baker and often my mother would send me to him to collect dough for her to make ‘mekitsi’, early in the morning, ready for breakfast.

Bob, my husband, and father in-law, Roy Gough, agreed to help financially to restore the Bakery house. We started the restoration in 2006 and Roy performed the official opening during the Third International Festival in 2008.

We now have our guesthouse with 6 bedrooms and can accommodate up to 12 people. All our guests are very welcome to enjoy Pirin village and relax during the Festival which takes place early June each year.